Log-Line This is a comedy musical about the story of the webtoon heroine who is addicted to some sort of stupid cartoon world even if she would like to be a heroine of romance comics, and main character in reality by applying webtoon contest.

Han-Do, the aspirant for webtoon writer got into the round of 16 for the college cartoon contest. At the same time inside the cartoon world, the new webtoon character contest held. Nam-Joo, the aspirant for romance cartoon character failed on the audition due to her low specification, so she joined into (some sort of stupid cartoon) ‘DOKIDOKI COLLECTION’ (Han-Do’s work). Nam-Joo adapted herself to this stupid cartoon by meeting some other characters in ‘DOKIDOKI COLLECTION’. Meanwhile, Han-Do became a private tutor of his friend’s sister, Soo-Jin. While he was on his roll by teaching Soo-Jin, he was accused of plagiarizing from Hyoung-Jun’s method, the famous romance cartoonist…

Intention of Creation Is there any other life between the cuts of characters in the cartoon? This work started from the question above, and tells about the daily life and crisis of webtoon characters, the cartoonist aspirant on the real life, and their new relationships in it. We are going to show the scenes of coming over the crisis by using characters’ conflict, harmony with comic method as well as to show the story to reveal the truth against the cheater who steals other’s method and technics on the world of earnest background to apply cartoon contest.

Young-Min Joo, Composer
HONG-IK University, School of Performing Arts, Musical major
Musical ‘BATH MAN’(2017), ‘Senior Envoy of Kyoung-Sung’(2017), ’Coming to you at the speed of light’(2015) and many more 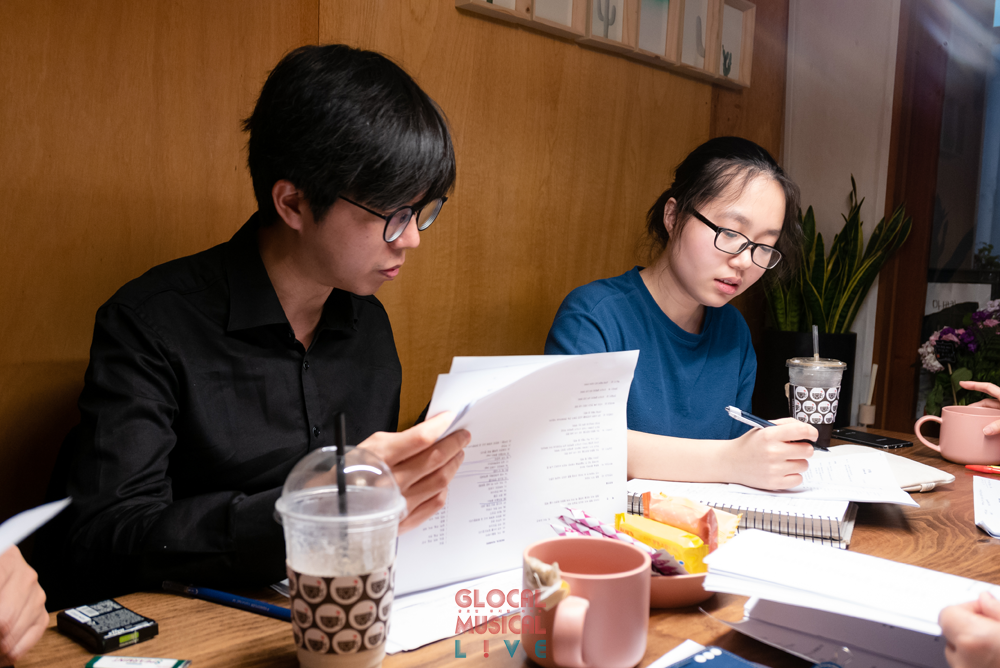 ‘COMIC-CAL’ has a structre to proceed by crossing real world and the world inside webtoon. In real world, there is a story of Han-Do, the aspirant to be a webtoonist by challenging webtoon contest, and in the webtoon world, there is a story of characters inside the webtoon which is drawn by Han-Do. At the 2nd mentoring for ‘COMIC-CAL’, insufficient parts were checked again from the revised scenario, and solutions were considered through the setup of each character again.

On the period of table reading, ‘COMIC-CAL’ was good reputed with unique subject, speedy process and comic scenario, however, it was pointed out with somewhat uncertain view of world and hard to understand about webtoon by normal audiences. So on the revised scenario for that point-out, webtoon world was limited to the world which Han-Do created, and somewhat unclear world view has been arranged more accurate by simplifying rules of that world. Importance of each character was controlled, specifically Susan stood out to be the person who helped Han-Do from her passive situation that she was such a bad replier before.

Mentor Lee said that the speed and fun were the main successful sources of ‘COMIC-CAL’, because it has practical and wit scenario which refer recent days’ buzzword inside internet nowadays. However, he wondered if “this was the one that audiences really wanted to watch?” One of the reason was that the characters inside this work do not show their situations and behaviors much urgent so that people can hardly emphasize them. Han-Do who got risk by being caught into the plagiarism dispute even if someone took his cartoons, and Su-Jin the repeater who loves webtoon most in the world are all attractive their own, however, ultimately speaking they are not that much pitiful characters. Lee said, “Even comedy should have some sort of ‘sympathy point’ which can pull every single audience”, and asked, “Writer should consider which scene can make Han-Do and Su-Jin feel this kind of emotion.” In other words, it is necessary to have a part for characters to be frustrated and despaired. But he advised, “Do not lose basic condition and energy of the work by remembering that the genre of this work is comedy.”

The longest time spent on the 2nd mentoring of ‘COMIC-CAL’ was to check character setup. ‘COMIC-CAL’ proceeds the characters’ relationship on the center of main hero, Han-Do. They are Yong-Joon who succeeded by stealing Han-Do’s webtoon, and Seo-Jin who is one of the old alumni of Han-Do.

But even if Yong-Joon was such a person who put Han-Do in danger, the relationship between two of them are insufficient, and Seo-Jin doesn’t have any important role in the work. Lee suggested to consider the setup to mix emotionally with Han-Do and Yong-Joon by making him more probably, and share the role of Seo-Jin to another character as a tip. For this matter, mentor and mentee tried to find out the best condition of setup by checking various situation to bring a result after their free conversation and discussion about the character, Yong-Joon. Then Lee added his advice not to forget that Yong-Joon inside this work should be the “bad guy with humanistic point of view.”

Meanwhile, Some advices about the referred scenario from buzzwords, other cartoons and dramas were continued. Lee reminded staffs that the referred scenarios and situations might be boring according to the period of performance. Also he said, “Reference is one of the powerful source of ‘COMIC-CAL’, however, it might bring unnecessary conflict by means of situation.” So when using it, we should be careful. Lastly he advised that especially when making something caricature, thinking again is the best way to reduce any sort of conflict.